The Silver Lining Foundation (SLF) applauds the Minister of Education’s recent comments that his ministry is committed to acting on information on bullying. This statement affirms a strong stance against violence in our nation’s schools by the Ministry of Education and certainly sends the right message that bullying should not and will not be tolerated. However the foundation holds the view that any policy that is reactive and not proactive in dealing with the issue of bullying will only create an environment that allows bullying to escalate in schools, and reinforces the number incidents of school based violence captured on video footage being circulated on social media.

Priority on addressing bullying of all kinds – be it verbal, physical, sexual, covert or hidden, cyber and homophobic bullying – should be prevented, and not addressed after the fact. This requires knowledge of the problem in its entirety, which the Silver Lining Foundation has been advocating for, in the form of a National School Climate Survey.

This survey would provide the ministry and other stakeholders with deeper insight and vital information about the nature and extent of bullying which students encounter in schools. However despite repeated attempts to acquire necessary approvals to conduct this survey in our nation’s schools, the foundation has met with strong resistance by the Ministry in the past because of the alleged sexual based component of the survey.

This resistance is seen as unfortunate because any policy meant to treat with the issue of bullying cannot be made without comprehensive empirical data that takes into account all factors associated with the issue. The foundation which addresses bullying under the framework of sexual orientation and gender identity issues is strongly advocating to the Ministry to ensure that any anti-bullying policy adopted by the Ministry reflects these realities for youths who may be perceived or identified as lesbian, gay, bisexual or transgender (LGBT) while in their classrooms.

SLF is urging the Minister to seek the advice and expertise from Non-Governmental Organisations (NGOs) and all relevant stakeholders in the formation of an effective policy on bullying which does not overlook race, religion and sexual orientation factors. SLF volunteers to contribute to this discussion, especially by providing the National School Climate Survey which we have already prepared and awaiting approval to execute.

We look forward to affirmative action from the Honourable Minister following his statements as we work together to provide a safe and protective environment for our nation’s students that fosters tolerance and acceptance in their classrooms. 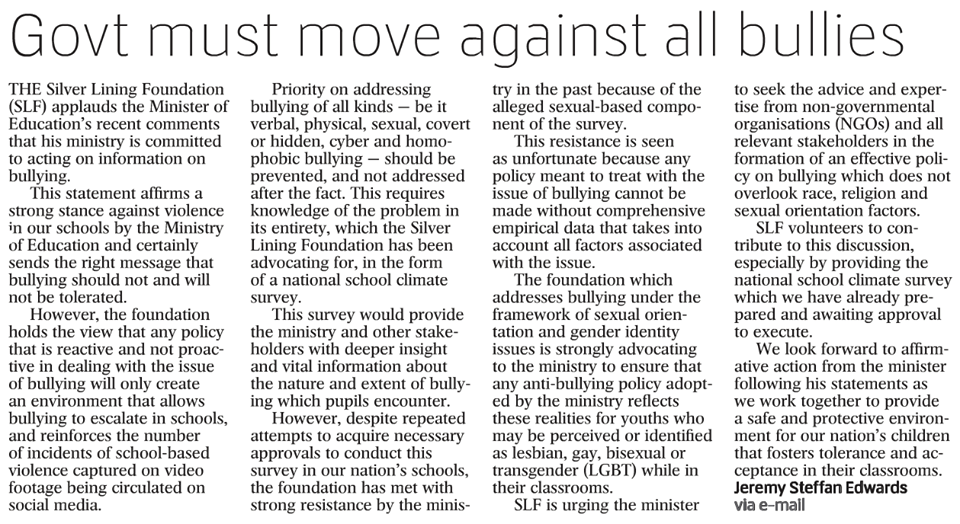