The Gender Bread Person is a learning resource that defines and distinguishes between sex, sexuality, gender and gender expression. It has been used to deconstruct harmful and limiting ideas surrounding these, but rather, it states that these elements of our identity are more fluid than we think. Recently, the gender bread person has been critiqued for being too limited and this has led to the creation of the Gender Unicorn.

“We created this graphic with significant changes to more accurately portray the distinction between gender, sex assigned at birth, and sexuality. Ultimately, we wanted to recognize genders outside of the western gender binary, which the Genderbread Person does not. Not all trans people exist on a scale of womanhood and manhood. There are several other issues with this graphic such as the use of the inaccurate term “biological sex,” the use of “asex” (which fails to recognize that everyone has sex characteristics prescribed to them), and several other issues with terminology and presentation.” (Trans Students Educational Resources, 2015)

What are the differences between sex, gender, and gender identity?

Check out this short 5-minute video for a simple and clear, yet very informative and effective, explanation on the differences between sex, gender and sexual orientation. 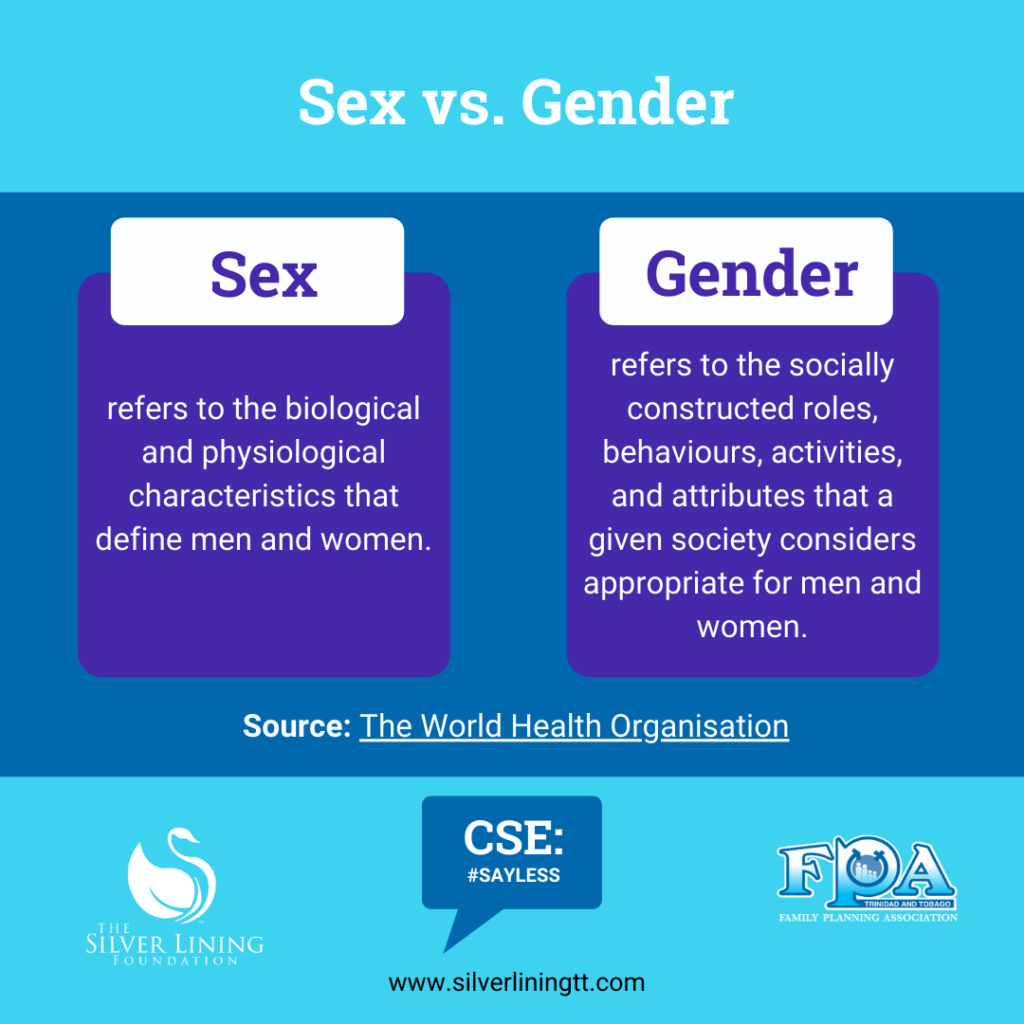 Assigned sex (also referred to as “biological sex”) is a label that you’re given at birth based on medical factors, including your hormones, chromosomes, and genitals. Most people are assigned male or female, and this is what’s put on their birth certificates.

When someone’s sexual and reproductive anatomy doesn’t seem to fit the typical definitions of female or male, they may be described as intersex.

Some people call the sex we’re assigned at birth “biological sex.” But this term doesn’t fully capture the complex biological, anatomical, and chromosomal variations that can occur. Having only two options (biological male or biological female) might not describe what’s going on inside a person’s body.

Instead of saying “biological sex,” some people use the phrase “assigned male at birth” or “assigned female at birth.” This acknowledges that someone (often a doctor) is making a decision for someone else. The assignment of a biological sex may or may not align with what’s going on with a person’s body, how they feel, or how they identify.

Gender is much bigger and more complicated than assigned sex. Gender includes gender roles, which are expectations society and people have about behaviors, thoughts, and characteristics that go along with a person’s assigned sex.

For example, ideas about how men and women are expected to behave, dress, and communicate all contribute to gender. Gender is also a social and legal status as girls and boys, men, and women.

It’s easy to confuse sex and gender. Just remember that biological or assigned sex is about biology, anatomy, and chromosomes. Gender is society’s set of expectations, standards, and characteristics about how men and women are supposed to act.

The video below is from an excellent resource provider called “Amaze” and explores a range of gender identities, gender expression and shares some helpful tips on how best to be a friend and ally to persons of all gender identities.

Some people feel that the sex they were assigned at birth doesn’t match their gender identity, or the gender that they feel they are inside. These people are often called transgender.

Transgender is about gender identity.

Transgender is a term that includes the many ways that people’s gender identities can be different from the sex they were assigned at birth. There are a lot of different terms transgender people use to describe themselves. For example, sometimes the word transgender is shortened to just trans, trans*, or trans male/trans female. It’s always best to use the language and labels that the person prefers.

Transgender people express their gender identities in many different ways. Some people use their dress, behavior, and mannerisms to live as the gender that feels right for them. Some people take hormones and may have surgery to change their body so it matches their gender identity. Some transgender people reject the traditional understanding of gender as divided between just “male” and “female,” so they identify just as transgender, or genderqueer, genderfluid, or something else.

Transgender people are diverse in their gender identities (the way you feel on the inside), gender expressions (the way you dress and act), and sexual orientations (the people you’re attracted to).

When people’s assigned sex and gender identity are the same, they’re called cisgender.

Gender dysphoria is a term that psychologists and doctors use to describe the distress, unhappiness, and anxiety that transgender people may feel about the mismatch between their bodies and their gender identity. A person may be formally diagnosed with gender dysphoria in order to receive medical treatment to help them transition.

Psychologists used to call this “gender identity disorder.” However, the mismatch between a person’s body and gender identity isn’t in itself a mental illness (but it can cause emotional distress), so the term was changed to reflect that.

People often confuse gender identity with sexual orientation. But being transgender isn’t the same thing as being lesbian, gay, or bisexual. Gender identity, whether transgender or cisgender, is about who you ARE inside as male, female, both, or none of these. Being lesbian, gay, bisexual, or straight describes who you’re attracted to and who you feel yourself drawn to romantically, emotionally, and sexually.

A transgender person can be gay, lesbian, straight, or bisexual, just like someone who’s cisgender. A simple way to think about it is: Sexual orientation is about who you want to be with. Gender identity is about who you are.