The UWI and Civil Society organisations build “A Sexual Culture of Justice” through transformative approaches to partner violence, homophobia, bullying and policing

The University of the West indies (The UWI) and its partner organisations have been awarded a Human Rights Grant from the European Union to carry out a project entitled, “A Sexual Culture of Justice: Strengthening LGBTQI & GBV Partnerships, Capacity & Efficacy to Promote & Protect Rights in Trinidad & Tobago”. This project is a new community-university collaboration that provides three years of support for some of the longest-standing and emerging local efforts to transform approaches to partner violence, homophobia, bullying and policing, while building partnerships and organisational capacity.

The project will be led by the University’s Institute for Gender and Development Studies (IGDS) which brings a keen understanding from its long history of research and outreach on  gender and social change, public education, policy research, and activism. The formal partners of this project include the six local civil society organisations known for their work in advancing LGBTQI (lesbian, gay, bisexual, trans, queer, and intersex) rights and protection, as well as forging strategies to end all forms of gender based violence. These organisations include: CAISO (Coalition Advancing the Inclusion of Sexual Orientation) which is T&T’s principal LGBTQI policy analysis and advocacy voice; Friends for Life which has pioneered community social work strategies to build LGBTQI resilience and address working-class needs; I Am One which organises the annual Pride Arts Festival and uses art and culture to represent the lived experiences of LGBTQI people; The Silver Lining Foundation, a youth organisation which champions anti-bullying in schools and promotes the developmental needs of LGBTQI youth; Womantra, a feminist organisation led by and for young women that engages in social justice actions including strategised initiatives to end gender based violence; and The Women’s Caucus of Trinidad & Tobago which engages in peer social support and community service for women who love women. Additionally, a non-formal partner, Say Something Trinidad & Tobago, which is a community action network born out of social protests on gender based violence, whose actions include holding public officials accountable, is also involved.  Other technical partners include The UWI’s Faculty of Law, the Equal Opportunity Commission, the Caribbean Male Action Network (CariMAN), and the Caribbean IRN resource network.

The project runs from April 2017 to March 2020, and will pursue a suite of linked activities (with families, teachers, counsellors, men in local communities, police, scholars, students, community organisers, media, and legislators) aimed at influencing “a sexual culture of justice” in Trinidad and Tobago through change in societal thinking. We envision this “sexual culture of justice” as advocacy for social change to gender norms and sexual rights, which is grounded in local analysis and action-based research. This is reflected in the project’s long-term distinctive approach to collaborative and innovative structural change.

Specifically, the project will:

The project culminates with a specially designed retreat for dissimilar participants— such as, a lesbian’s father, a recovering abuser, a police corporal, a school principal, a trans sex worker, a domestic violence survivor, and a youth activist— all of whom can teach each other lessons and plan joint human rights activities.

For further information regarding this project, please contact the Lead Researcher at the Institute for Gender and Development Studies, The UWI, Dr. Angelique Nixon, via telephone: (868) 662-2002 ext. 83548 or e-mail address: angelique.nixon@sta.uwi.edu. 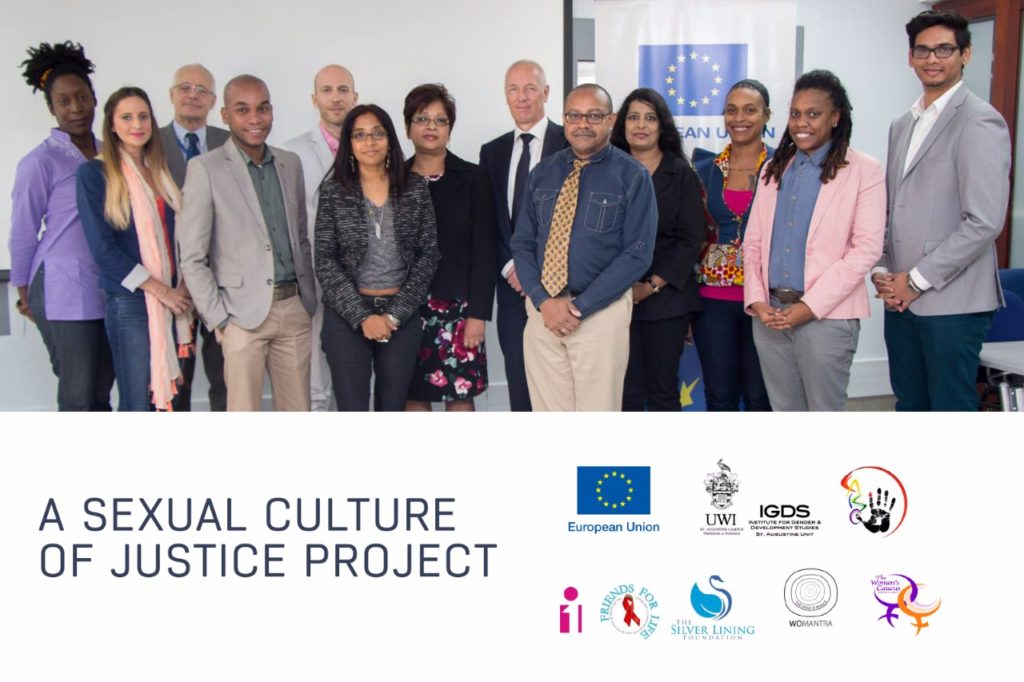 View the statement in full at: MEDIA RELEASE Sexual Culture of Justice