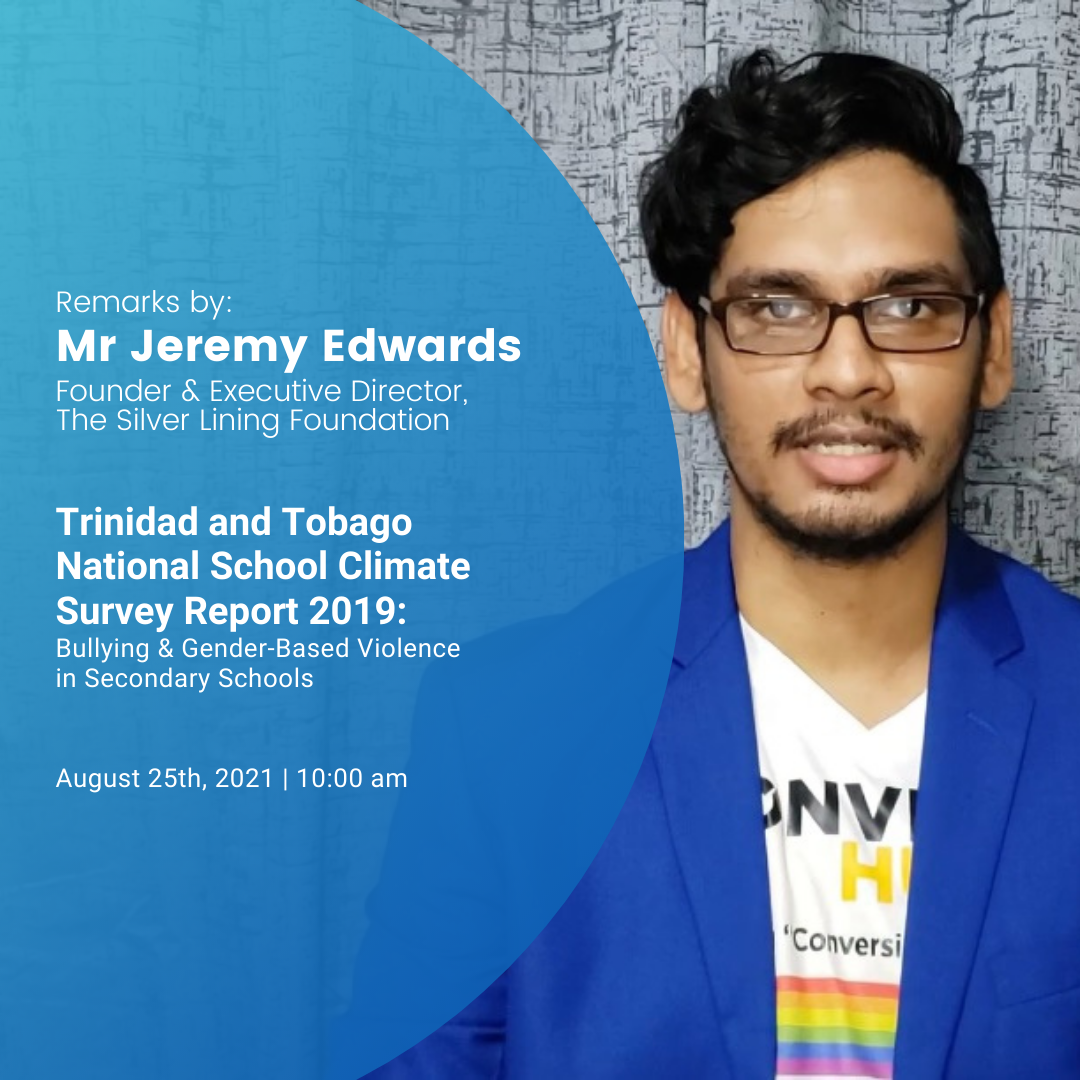 Mr Sanjin Soldatic, Political Officer/Charge d’ Affaires of the Delegation of the European Union to Trinidad and Tobago, Dr Sue-Ann Bharat, Head of the Institute of Gender and Development Studies (IGDS) and immediate past Head, Dr. Gabrielle Hosein, members of the Diplomatic Corps and Representatives of Foreign Missions, Colleagues of the Sexual Culture of Justice Project, Friends and Colleagues of Representative NGOs and Education Stakeholders, specially invited Guests, members of the Media, good morning. On behalf of my team at The Silver Lining Foundation and our research partners at UNESCO, The Sexual Culture of Justice and the European Union in T&T, I want to welcome you to the launch of the 2nd Trinidad and Tobago School Climate Survey measuring Bullying and Gender-Based Violence in Secondary Schools.

A little over three years ago, we presented the findings of our pioneering research from the 2016 National School Climate Survey which documented the educational experiences of our nation’s youths in their schools. The findings of this research underscored what was already a known fact to many of us at the Silver Lining Foundation – that bullying is real and the harm it unleashes impacts the safety and quality of education we provide to our nation’s children.

Here’s what our kids were telling us in 2016 about their experiences:

Our survey also alarmingly showed that 15% of students were victims of sexual assault or rape with half of those respondents saying they were unsure if they could categorise their experiences as either a “sexual assault” or “rape” because of their lack of knowledge on these topics. Remember, this was only in 2016!

In terms of trends, our study also showed that male students were more likely to engage in bullying behaviours and experienced more verbal and physical acts of bullying. Meanwhile, girls were slightly more likely to experience sexual and cyberbullying.

We also discovered that boys tended to display acts of aggression arising from attacks based on their physical appearance, sexual orientation and gender expression. In this regard, boys were more often verbally attacked for their sexuality or gender expression than girls.

Meanwhile, LGBT students experienced bullying at higher rates than non-LGBT students and also showed a higher propensity in all categories for engaging in bullying.

Again, none of this was particularly surprising to us because these findings were consistent with some of the previous global studies conducted by UNESCO in 2012 which showed that the majority of bullying in schools was associated with sexual orientation and gender identity and gender expression.

Given these findings, students faced a range of emotional and psychological stress and distress. SLF knew we couldn’t just leave these findings to become forgotten statistics. It was easy to diagnose the problem but how we deal with the problem mattered more.

So how did we act with this data? The findings showed that we needed to adopt a more holistic approach if we wanted to reduce and remove incidences of bullying. This included looking at how we teach, how we govern and how we offer support.

One of the first things we did was develop and implement a training workshop that was designed to provide a better understanding of gender, sexual diversity and bullying to educators and school administrators. Through our partnership with the European Union and the British High Commission and under the guidance of the Sexual Culture of Justice project, the SLF Safer Schools: Managing Diverse Classrooms Workshop educated over 100 teachers and guidance counsellors with restorative justice practices and other strategies focused on modelling favourable behaviours to help move the response to bullying away from punitive punishment.

Following this, SLF also introduced an anti-school violence campaign called ALL DIFFERENT | ALL EQUAL with our partners at the British High Commission. This campaign encouraged teachers to return to the classroom and implement the different measures to reduce bullying and gender-based violence that they were taught at our workshop. So, that’s how we teach.

Now, to how we govern. One of the questions that kept emerging in the workshop was the dichotomy between bullying and violence. We understand the Ministry of Education has a policy to address violence in schools in the absence of acknowledging that bullying exists. Yet, both our 2016 and 2019 School Climate Surveys proved that bullying is real. Therefore, we cannot say we are addressing school violence without considering the impact bullying has on our children. So, how are we really addressing violence in schools? In other words, how are governing?

Finally, we look at how we show support.

I am not quite sure what it is going to take for our country to recognize that LGBTQ+ people exist and that our human rights should not be subjected to debate. But what I do know is that we will never stop living in our truth until we have achieved an equal and equitable society for every citizen. So, why are we ignoring the experiences of LGBTQ youths in our nation’s schools and in their homes? Our survey findings clearly show their physical, mental and emotional wellbeing are under threat every day from being subjected to homophobic taunts, slurs, threats, intimidation and physical violence.

That’s why SLF launched the Stronger Families initiative under the SCJ project because we wanted to provide psychosocial support for parents and guardians of LGBTQ youth. Recognising the decades of research that show that young people who have the support of the family in their formative years are less likely to experience mental health and developmental issues later on in life, we knew this was going to provide a healthy and safe environment to help LGBTQ youths deal with the bullying they are often subjected to at their schools. And while that’s not the full solution, it’s just one way we can show support.

But there’s still so much more we can do! Addressing bullying and gender-based violence starts with moving away from the repressive and punitive responses that have held us back in the past. Today, we ought to be adopting solutions that are founded on proven research and data.

Therefore, we need to find new ways to disrupt bullying without disrupting children’s right to learn. We need to reform the curriculum to include different aspects of children’s development. We need to build out more robust student support services. We need to introduce age-appropriate comprehensive sex education in the classroom. We need to develop sector-wide policies and programmes from the data we are sharing today. None of this is new. Yet what remains old is our lack of response to do anything! It is clear that there is a huge gap that still needs to be filled but in the absence of clear timelines or dedication of resources, we cannot achieve any of these initiatives.

Recently, the UK-based firm Open For Business revealed that the Caribbean loses upwards of $4 Billion Dollars from tourist revenue due to anti-LGBTQ discrimination. Similarly, the question can be asked, what is the cost of bullying and violence on each child’s learning outcomes and the consequent impact on national development when our young people are denied the opportunity to learn? When young people, especially LGBTQ youth, are denied opportunities to achieve their fullest potential, what is the cost to the nation many years down the line? Also, what does it cost when young people migrate to other countries because of a lack of opportunities here at home or because their home country is generally an unwelcoming place because of their sexual orientation? Finally, what will be the cost to national development when over 35,000 students at secondary and primary schools did not have access to laptops and learning devices and had their education disrupted this past year? And yet still, 2,000 more have become dropouts.

Discrimination, bullying, violence and inequality present real and quantifiable costs to national development. What are we going to do about it? While this survey is not going to give us the specific value of these losses, what we will share with you today are the lived-realities of secondary school-aged students as it relates to bullying and gender-based violence.

So, we thank you for taking this journey with us.

Even before she starts, I’d like to thank lead researcher, Dr Ghisyawan, and statistician, Yasphal Kissoon, for their labour of love on this project. Thank you to our donors at the European Union delegation of Trinidad and Tobago and our partners at the Sexual Culture of Justice project and The University of the West Indies for help on the execution. We also thank our partners at UNESCO for continuing to make our work possible. Thank you to the Ministry of Education for providing the approval needed to conduct this survey. And thank you to the 2,284 students from 39 secondary schools who bravely shared with us their experiences to collate these findings. I do hope our efforts today and beyond will provide you with the safety, justice and other resources you deserve to achieve your full potential in life. And, finally to my team at the Silver Lining Foundation who sacrifice so much of their time and resources to ensure that we continue to support, educate and advocate, thank you for your continued dedication, commitment and leadership.

So, with those words, I now hand you over to our host and Director of Research and Development and Lead Researcher, Dr. Krystal Ghisyawan, who will take us through the presentation of findings.